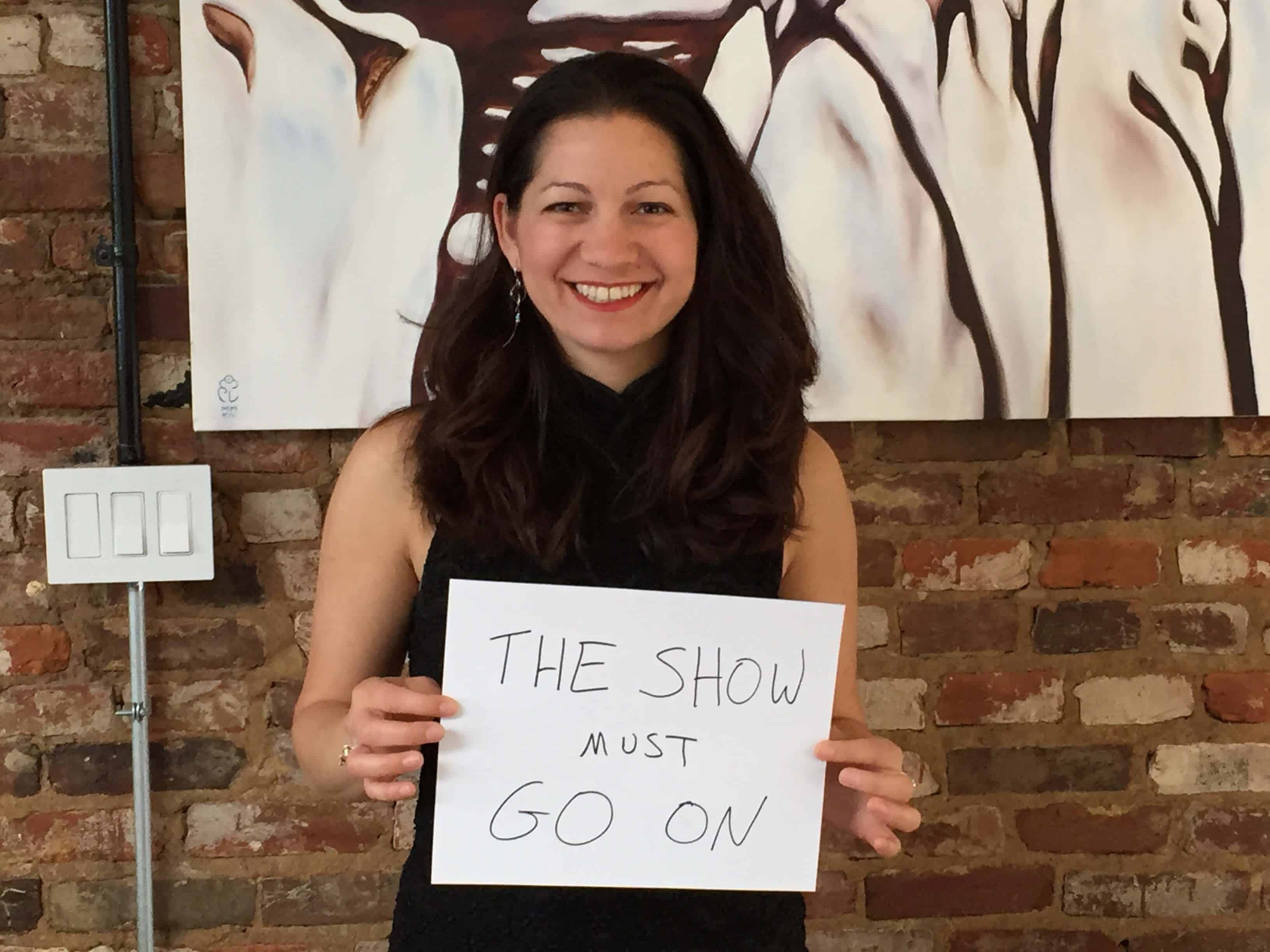 The Show Must Go On

We all make mistakes from time to time when speaking in public. I often joke that there are two versions of every speech: the one you write and the you actually give. We might not be feeling well, we might have had too little time to prepare, or our slides might not work. Often times, we apologize to our audience for it, saying something like, “Bear with me; as you can tell, I’m recovering from a cold” or “Sorry, I only found out this morning that I had to give a speech.”

We also apologize by inadvertently making facial expressions that show the audience when we lose our place, when our clicker doesn’t work, or when we need to go back to something. We grimace, we say, “um, well, ah,” and sometimes we even say, “Oh, sorry, wait.”

Essentially, when speakers apologize, they are saying, “Sorry, you’re not going to hear a good speech today.” And no one in the audience wants to hear that!

So instead of apologizing with your words or your expressions…simply keep going as if that’s the way you intended it to be, or joke to make light of the situation. Unless you accidentally assault a member of the audience, there is no need to apologize.

…you’re not feeling well? This happened to me a few weeks ago when I had a bad cold and was scheduled to give about 5 speeches in one week. If you can’t actually produce sound, do whatever you can to avoid giving the speech. But if you’re well enough to be out of bed, then try complete vocal rest one day before the speech (no talking, no whispering) coupled with hot herbal tea with honey. Bring tea to the speech itself and unapologetically sip throughout your speech. If you need to tell someone in advance, tell the organizers and come up with a backup plan if something should happen during the speech.

…you forget what you’re supposed to say next? I recommend bringing bullet points of your speech (not the entire script) written in large font and ALL CAPITALS. If you forget where you are, you can pause thoughtfully, walk towards your bullet points, glance down briefly while nodding, then say something like, “Let’s back up for a minute” or “And now I’d like to talk about” and simply keep going. No wild glances to the side, no grimacing, no apologizing.

…the slides don’t work? Then calmly and conversationally ask your A/V contact to help you (hopefully you checked the slides in advance to make sure they were working). I like to use the humorous phrase, “Live by PowerPoint, die by PowerPoint” and it always makes the audience laugh. We’ve all been in this situation; it’s how you handle it that counts.

My old voice teacher used to perform with the Metropolitan Opera. She once told me about a time she performed a very difficult aria. This aria involved long, extended vocal scales requiring very deep, sustained breathing. During one performance, she was so physically taxed that she had to take a breath in the middle of a phrase, something that is generally forbidden in opera. One person asked her after the performance, “But why did you take such a big breath in the middle of that scale?” She smiled proudly and responded, “Because I had to!”

Luckily, public speaking is a lot more forgiving than opera. We rarely give a perfect speech; in fact, the audience doesn’t want a perfect speech, they want a speaker who is authentic and passionate about his or her subject.

So the next time you’re in front of an audience and feel like saying “I’m sorry,” simply pause, breathe, and smile – and keep going like that’s what you had intended to do all along.